CBD oil, sold in stores throughout Ohio, is illegal and can carry a felony charge

CLEVELAND, OH (WOIO) – CBD oil is available online, in every state and is commonly found on store shelves across Northeast Ohio; however, it’s illegal and can result in a felony charge.

So, why the big confusion over the chemical compound?

“I got pulled over in a traffic stop and long story short, they found CBD oil,” said Robert Faulkner.

It was July of last year when Faulkner was arrested in Richland County.

“I tried it for my anxiety. It didn’t work for me at that particular time and I just threw it in the back on my truck,” he said.

Faulkner said he bought it from a store in Columbus. He said the oil was made and manufactured from a hemp store in Cincinnati.

“I never went to the store and thought I was buying something that would potentially put me in prison,” he said.

Faulkner was slapped with two counts of aggravated possession of drugs. He’s awaiting a grand jury trial for the felony charges.

Here in Ohio, you cannot possess CBD oil. The laws aren’t stopping people from buying it and it’s not stopping stores from selling it.

Faulkner believes the reason is there is so much confusion about the law.

“I didn’t knowingly obtain everything illegal. I went to a store to try to help me with an issue I have,” said Faulkner.

THC is the chemical compound responsible for the high in marijuana. The DEA says they’ve learned through science, that CBD will always contain some amount of THC, even trace amounts that won’t get you high.

But given the presence of THC, the over-the-counter oil is illegal.

According to the DEA:

“Any displays, sale or solicitation of CBD oil is illegal and individuals involved are subject to federal investigation and prosecution.”

We found in some states, like in Texas, police are raiding stores who are selling CBD oil.

So why isn’t that happening here if it’s illegal?

The DEA wouldn’t say, but did say stores selling it aren’t immune from federal investigation.

Faulkner says he hopes officials and lawmakers can help make the laws more clear so this doesn’t happen to someone else.

“I have an ankle monitor on right now. I have to go check in with probation. I spent four days in jail. This is impacting my life seriously, for something I bought in at the store to just try to help my anxiety.”

The FDA recently approved a CBD oil medication that is used to help treat epilepsy.

Why we must repeal prohibition 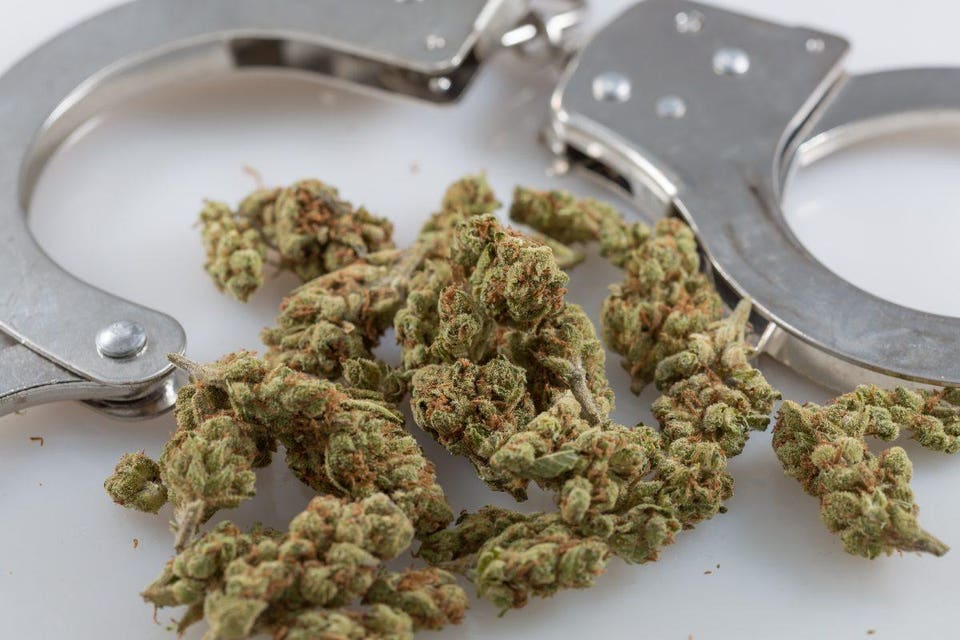 Marijuana arrests are rising in the U.S., even as more states legalize cannabis.

There is now an average of one marijuana bust roughly every 48 seconds, according to a new FBI report released on Monday.

The increase in marijuana arrests—659,700 in 2017, compared to 653,249 in 2016—is driven by enforcement against people merely possessing the drug as opposed to selling or growing it, the data shows.

The increase in cannabis possession arrests comes despite the fact that four additional states legalized marijuana on Election Day 2016.

While among those states, legal recreational sales were only in effect in Nevada by the end of 2017, the prohibition on possession for adults was lifted soon after the successful votes there as well as in California, Maine and Massachusetts.

“At a time when more than 100 deaths per day are caused by opioid overdoses, it is foolish to focus our limited law enforcement resources on a drug that has caused literally zero,” Don Murphy, federal policies director for the Marijuana Policy Project said in an interview.

“Actions by law enforcement run counter to both public support and basic morality,” added NORML Political Director Justin Strekal. “In a day and age where twenty percent of the population lives in states which have legalized and nearly every state has some legal protections for medical cannabis or its extract, the time for lawmakers to end this senseless and cruel prohibition that ruins lives.”

There is now a drug bust every 19 seconds in the U.S.