CREDO released the statement below in response to reports that Pres. Trump plans to sign executive orders to advance construction of the Keystone XL and Dakota Access pipelines:

“President Trump is showing that he’s in the pocket of big corporations and foreign oil interests,” said CREDO Deputy Political Director Josh Nelson. “Approving these dirty oil pipelines would poison American air and water, supercharge climate change and trample Native American rights,” Nelson continued. “Fierce grassroots activism has stopped these pipelines over and over again,” he added. “CREDO will do everything in its power to stop the Dakota Access and Keystone XL pipelines, and keep dirty fossil fuels in the ground where they belong.”

MORE THAN 500,000 PUBLIC COMMENTS: CREDO activists submitted 511,000 public comments to President Obama’s state department in opposition to Keystone XL.
MORE THAN 40,000 PHONE CALLS IN OPPOSITION TO KEYSTONE XL: CREDO Activists made 42,804 phone calls to the White House, the State Department, the EPA, Members of Congress and others in opposition to Keystone XL.
283 PROTEST VIGILS ATTENDED BY MORE THAN 10,000 ACTIVISTS: Just 72 hours after the release of the State Department’s final environmental impact statement, CREDO organized 283 protest vigils in 49 states, with more than 10,000 total participants. It was the biggest, rapid-response, on-the-ground demonstration of Obama’s presidency to date.
CREDO’s work against the Dakota Access pipeline includes:
400,000+ PETITION OBAMA TO REJECT PIPELINE: More than 418,000 CREDO members  signed CREDO’s petition demanding that President Obama intervene and stop the Dakota Access pipeline. Specifically, the petition calls on the president to “direct the U.S. Army Corps of Engineers to revoke the permits under ‘Nationwide Permit 12’ and stop the Dakota Access pipeline once and for all.” The full petition can be found here:http://act.credoaction.com/sign/NoDAPL/

NEARLY 3,000 #NoDAPL CALLS TO THE WHITE HOUSE: CREDO members made more than 2,800 calls to the White House urging President Obama to stop the Dakota Access pipeline. View the current number of calls and call script here:http://act.credoaction.com/call/call_obama_dapl/

180,000+ PETITION OBAMA AND GOV. DALRYMPLE TO UPHOLD FIRST AMENDMENT RIGHTS: More than 189,000 CREDO members signed a petition urging Pres. Obama and North Dakota Gov. Dalrymple to “uphold the rights of Native Americans and their allies to peacefully resist the Dakota Access pipeline without threat of violence.” The full petition can be found here:http://act.credoaction.com/sign/dapl_assault/

CREDO Action, part of CREDO Mobile, is a social change network of 4 million activists, sending millions of petition signatures and more than 100,000 phone calls to decision-makers each year. CREDO Action members also participate in meetings, protests and other direct action for progressive change.

President Donald Trump took steps to advance construction of the Keystone XL and Dakota Access oil pipelines while foreshadowing a “renegotiation” of terms and insisting that developers use U.S. steel.

Trump stopped short of green lighting construction on either project, and reiterated an earlier campaign pledge to seek a “better deal” on TransCanada Corp.’s proposed Keystone XL to transport Alberta oil sands crude into the U.S. On Tuesday, Trump called that “something that’s been in dispute and subject to a renegotiation of terms by us.”

President Donald Trump took steps to advance construction of the Keystone XL and Dakota Access oil pipelines while foreshadowing a “renegotiation” of terms and insisting that developers use U.S. steel.    https://www.bloomberg.com/politics/articles/2017-01-24/trump-said-to-plan-orders-approving-keystone-dakota-pipelines 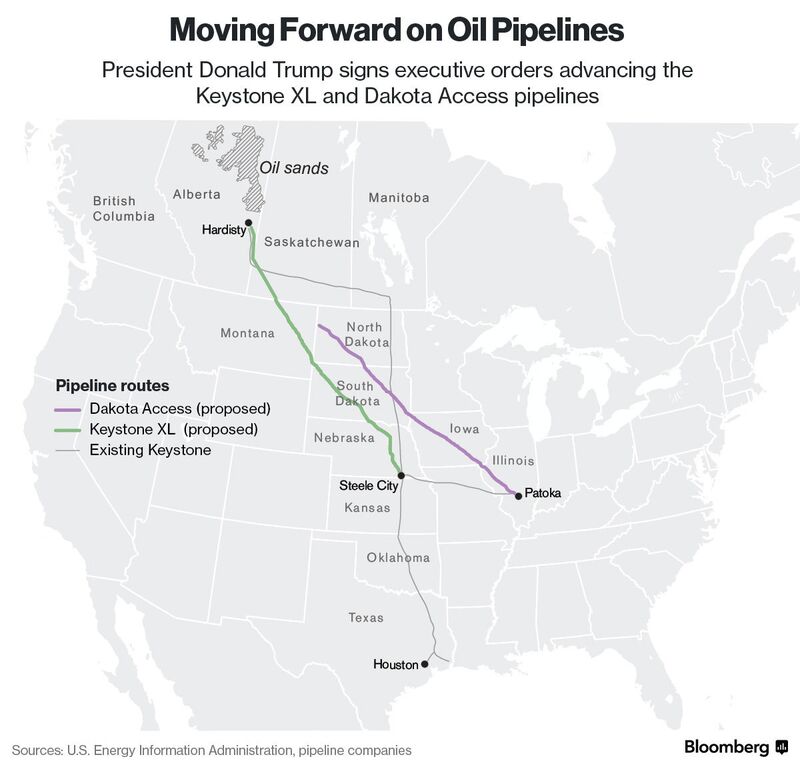 The fight to stop the Dakota Access Pipeline (DAPL) wages on. Just this week law enforcement used tear gas and fired bean-bag rounds to disperse crowds and arrested nearly 40 people since Monday, the Billings Gazette reported. One Water Protector appears to have suffered a nasty wound in his leg after an alleged confrontation with an officer on Thursday (warning, the photo is graphic).   But that’s not the only concerning news story developing around the controversial project.     http://www.ecowatch.com/dapl-trump-missile-launch-2203044415.html